A Gold Mining Tour: Hunting for Treasure on the Osa

In a recent post, we let you know about a fantastic rural tourism project in the town of Dos Brazos de Rio Tigre on Costa Rica’s Osa Peninsula. While the highlighted tour of the Association is their newest trail into Corcovado National Park, there are several others that are just as fun. One that we took focuses on the history and current practices of gold mining in the region. In this post, we’ll share our experience panning for gold in the rivers of the Osa Peninsula and let you know how you can try it too. 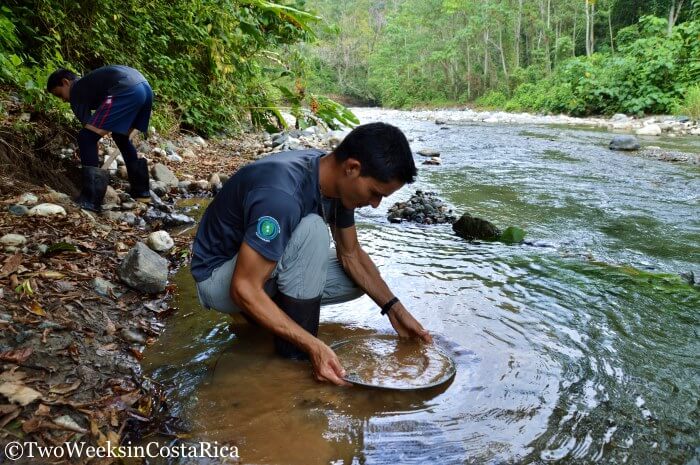 History of Gold in Costa Rica

When Christopher Columbus first reached Costa Rica in 1502, he named the land the Rich Coast (Costa Rica) after meeting indigenous groups who were wearing elaborate gold medallions and jewelry. The great explorer thought that the rugged landscape must be full of the precious mineral. That wasn’t the case as later adventurers would find out. Instead of originating in Costa Rican soil, much of the gold had been traded in from as far as South America. But there were some areas of the country that did hold impressive gold deposits. One such place was the Osa Peninsula on the southern Pacific Coast.

Our gold mining tour started at a modest wood-framed building off the side of a dusty dirt road. There, we were welcomed by Ermer Azofeifa, president of the small community association of Dos Brazos de Rio Tigre. From Ermer, we learned a bit more about gold mining in the region. Mining, he told us, began as early as the 1930s and peaked about 40 years later. Communities dedicated to gold mining popped up, as big companies with heavy machinery worked to strip away gold deposits. Over time, the extensive mining activity removed the most easy-to-access gold, outside of protected land like Corcovado National Park. With little left to mine, towns like Dos Brazos eventually shrunk from a population of several thousand to just a few hundred. Many of the families who stayed entered the national park illegally, both to mine for gold and to supplement their shrinking income by hunting and trapping.

The Conservation Association of Dos Brazos de Rio Tigre (Asociación Conervacionista Dos Brazos de Rio Tigre) was created to provide these former gold miners with new skills and jobs so that they would be able to remain, and thrive, in Dos Brazos. The Association’s efforts have been successful. Over the last year alone, they have converted 25 former gold miners and hunters into tour guides.

On the Treasure Trail: Our Experience on the Gold Mining Tour

With a rusty shovel in hand, our guide, José, a young guy in his 20s, led us to the river. Alan, his younger sidekick, tagged along too, binoculars strung around his neck and a large metal pan by his side. These guys were the next generation of Dos Brazos and it wasn’t long before we got to see the older generation too. Just up the riverbank, knee deep in the water, a man was working away. He kept his head down, shoveling and tossing away rocks, looking for that dull shine of gold below. José explained that men like this will work all day in the hot sun for what might amount to $30 worth of gold. Hard labor for sure, but you never know when you might get lucky.

Tip: Be prepared to get your feet wet on the tour. Wear sturdy hiking sandals like Keens that can get wet or high rubber boots if you want to stay dry. By the end of our tour, our low-cut hiking boots were drenched, making the walk back pretty uncomfortable.

After a half-hour walk through the thick jungle, crossing the shallow river several times, we came to a spot that José thought would turn up some gold. He and Alan laid down their tools and explained that the loose gravel embankment next to us was the perfect place to look. When heavy rains wash sediment down river, sometimes it brings new gold into the river from the surrounding hills.

At the edge of the water, Alan scooped a heavy shovelful of gravel onto José’s round pan. Dipping it below the surface, a muddy cloud of sediment washed away. José picked through the remaining gravel, tossing the larger stones into the water, and then dipped the pan again. This time he used a swirling motion, and another cloud of fine sediment was swept downstream. Repeating the process, the stones became smaller and smaller and the sediment dissipated. After about 10 minutes, tiny grains of sand were all that was left. A few more careful swirls and we saw it—gold.

José made the whole process look easy, finishing it off by sucking the tiny fleck into a modified ketchup bottle. Now it was our turn to try, and the true skill involved became apparent. Matt clumsily dipped the next heap of gravel underwater, letting a little too much sediment go downstream. Swirling the pan was even harder, requiring a certain rhythm. You have to let just the right amount of sediment out while keeping the heavier grains of sand in the pan. After a few tries, he started to get the hang of it, and with a little help from Alan, another speck of gold appeared at the bottom of the pan.

After our gold-mining demonstration, we hiked a bit farther to a local swimming hole to cool off. On the way, we enjoyed spotting about 30 different bird species. Alan, a bird enthusiast, knew all the English names and even identified some by their call. On the walk back to town, José told us that this route was the same one that he took to school every day as a kid. Things had changed for him a lot since those days. Now, he looked at the forest in a different way, identifying various plants and sharing his knowledge of the jungle. He was constantly learning new things about the forest he had walked through a thousand times.

We ended our tour back in the small village of Dos Brazos de Rio Tigre at a little riverside restaurant. As we ate a hearty meal of chicken and rice, Scarlet Macaw Parrots ate almonds from a tree overhead. It was the perfect ending to a fantastic tour.

Arranging a Tour: It’s best to contact the Association through their website in advance so that they can plan for your arrival. Walk-ins are also possible, but there is a risk that a guide might not be available.

Directions and Other Tours Offered

For directions to Dos Brazos de Rio Tigre as well as information about the other tours available, be sure to read our post Corcovado’s El Tigre Entrance: Hiking and Activities from Puerto Jimenez.

Looking for more information to help plan your trip? Check out these posts: 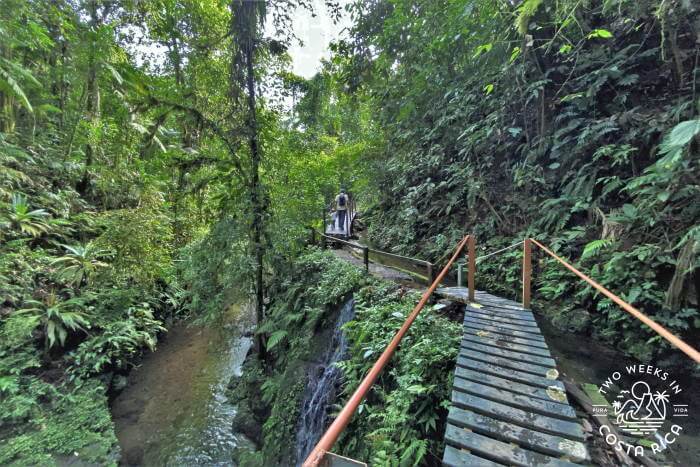